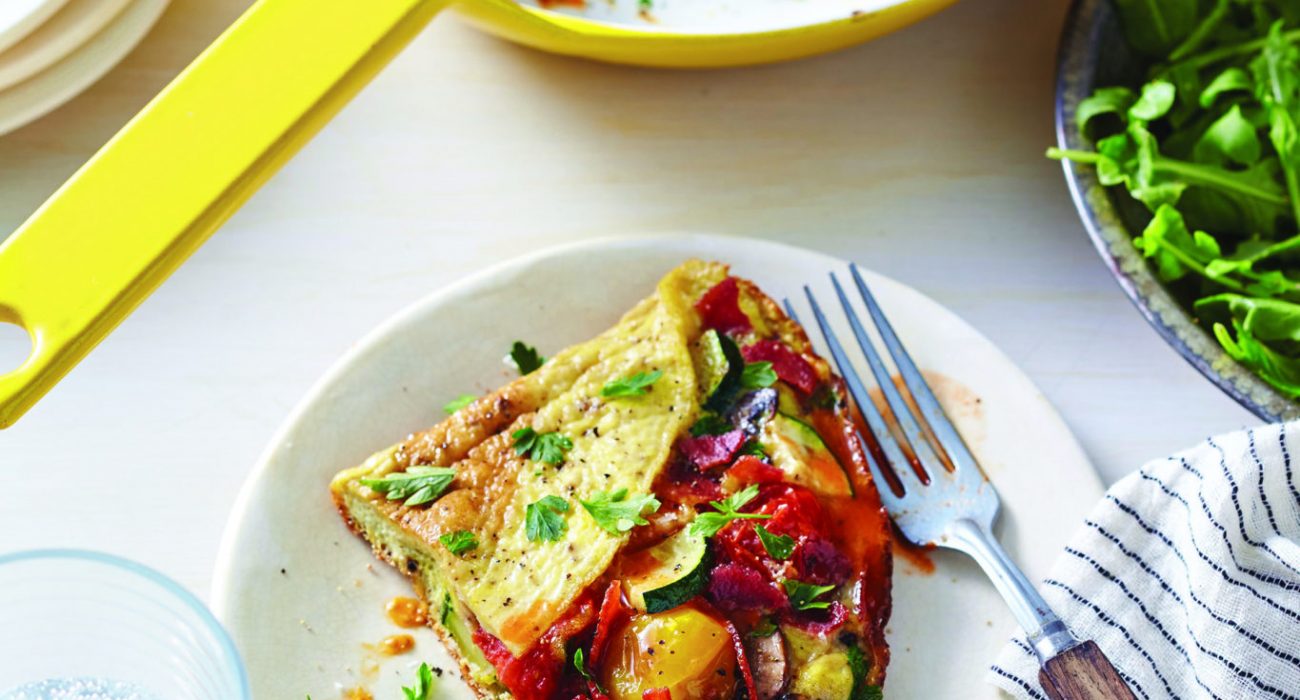 I grew up a cereal girl. Eggs were for the weekends. I’ve changed, as you can tell, but this all-in omelet is a favorite of mine for weekend mornings when Tom and I wake up super hungry or feel like brunch. I also like that I can empty the fridge into this omelet. When my veggies have only a day or two left, they go into this dish. Sometimes I chop them the night before and get my prep done, making this even quicker in the morning so I get more time with my crossword puzzle. Omelets need attention as they cook; it’s all about pulling the edges off the side of the pan and making sure the egg cooks without overcooking. I build my omelet slowly and then spread the ingredients evenly. If you want to fancy it up, serve with a few avocado slices on the side. This dish is a winner, and you’ll feel like one, too.

1. Preheat the oven to 400°F. Place the turkey bacon in a single layer on an aluminum foil-lined rimmed baking sheet. Bake until crispy, about 15 minutes. Cool for 10 minutes; crumble and set aside.

2. Whisk together the eggs, water, salt, and pepper in a bowl. Set aside.

3. Heat 1 tablespoon of the oil in a large nonstick skillet over medium-high. Add the tomatoes and mushrooms; cook, stirring occasionally, until the tomatoes have burst and the mushrooms are browned, about 8 minutes. Add the zucchini and garlic; cook, stirring often, until tender, about 4 minutes. Transfer the mixture to a bowl. Fold in the crumbled bacon and parsley. Wipe the skillet clean.

5. Transfer the omelet to a plate; cover loosely with foil to keep warm. Repeat the process with the remaining oil, egg mixture, and tomato mixture.

6. Sprinkle the omelets with some parsley; serve immediately.

Make the filling the night before for quicker omelets in the morning.